Tesofensine (NS2330) is classified as a presynaptic serotonin–noradrenaline–dopamine reuptake inhibitor. When these three neurotransmitters are prevented from being reabsorbed by the central nervous system, the body responds by feeling less hungry. Tesofensine acts primarily as an appetite suppressant with simultaneous effects on fat oxidation and resting energy expenditure. Tesofensine also has a modulating action on dopamine in a particular section of the brain which appears to affect the pleasure sensation of food consumption.

Since tesofensine has an effect on dopamine, let's first take a look at why that matters by talking about dopamine adaptation.

Dopamine is a neurotransmitter that helps produce feelings of satisfaction and pleasure. When out of balance we can lose these important benefits. Decreased dopamine signaling through overeating can lead to dopamine adaptation and behavioral changes.

Altered dopamine signaling can cause weight gain, obesity and glucose intolerance. It is estimated that 70% of obese individuals have fewer receptors for dopamine compared to normal weight individuals. There are two reasons to explain this. Either the obese individuals have low numbers of dopamine receptors to begin with or their bodies are trying to compensate for having chronically high dopamine levels, which are triggered by chronic overeating.

Regulation of body weight is extremely complex—it involves many physiological mechanisms and neurotransmitter action. Addressing the dopamine receptor deficiency or finding other ways to regulate dopamine in obese people might help reduce the tendency to overeat.

Dopamine transporter proteins are inhibited by tesofensine, so the dopamine receptors are stimulated for a longer period after activation and the brain's reward system is amplified. With a similar mechanism of action, tesofensine also increases levels of two other monoamines, serotonin and noradrenaline. Each of these transmitters exert an important function on appetite and metabolism at different locations in the brain. Dopamine acts in the nucleus accumbens of the forebrain to modulate reward and the "pleasure" feeling of food. The two other transmitters act in the hypothalamus to increase metabolism and reduce appetite.

In addition to diet and lifestyle changes, the unique action of tesofensine can help reverse blunted dopamine response in obese patients. This combined with exercise (which we know boosts dopamine may be a viable option for weight loss. 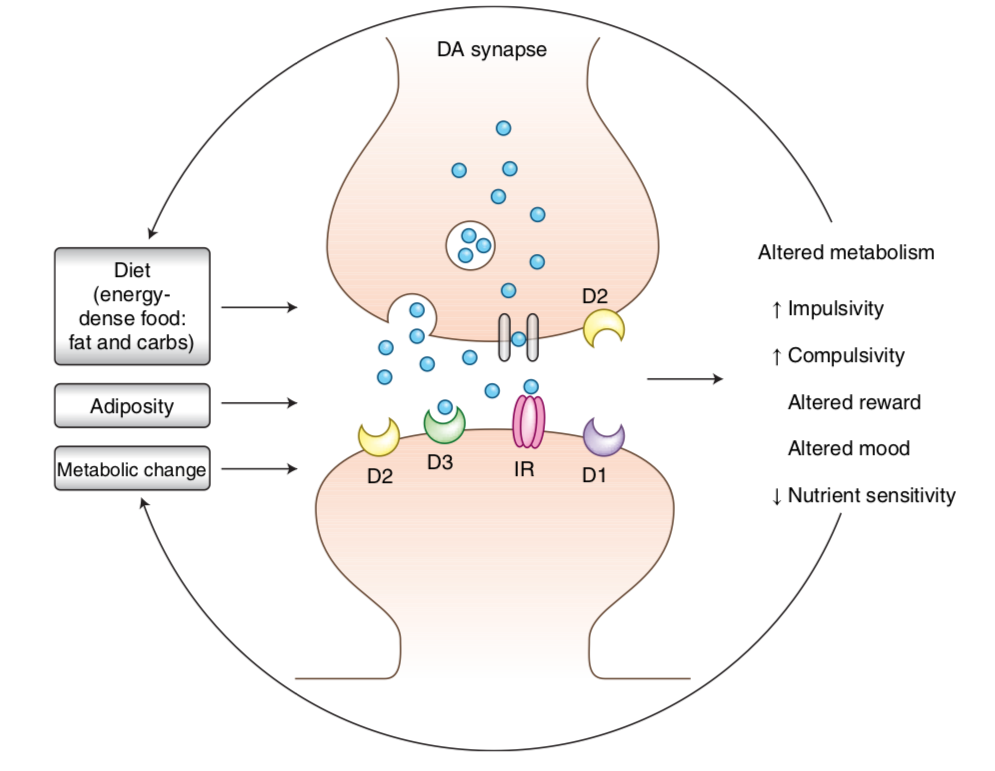 The clinical Phase 2b trial reported in The Lancet showed levels of weight loss over a six-month period. Patients lost an average of 28.2lbs on a 1 mg dose, 24.9 on a 0.5 mg dose and 14.7lbs on a 0.25 mg dose compared with a 4.8lbs loss in the placebo group. All participants were instructed to follow a diet with a 300 kcal deficit and to increase their physical activity gradually to 30-60 minutes of exercise per day.

This study was a 24-week double-blinded, randomized, placebo-controlled trial. It was designed to investigate the efficacy and safety of 0.25mg and 0.50 mg oral tesofensine compared to placebo in 372 obese patients.

The following are possible outcomes and benefits for individuals using tesofensine:

In general, tesofensine is very well tolerated with few adverse effects and very similar to placebo. When measuring cardiovascular effects, a low but statically significant increase in heart rate was noted but no significant effect on blood pressure at any of the doses tested.

The combined clinical safety database from more than 20 clinical trials with tesofensine now contains approximately 1,600 patients taking a therapeutic dose for up to a year, providing robust safety data. It has been given FDA approval as an orphan drug.

Potential Side Effects of Tesofensine

The side effects of tesofensine are similar to other currently approved diet pills and weight loss medications.

Get in touch if you'd like to learn more about medical weight loss.

Consultations are for anyone looking into their medical weight loss and appetite suppressant options. In the consultations, we work together to develop a medical weight loss plan that is safe and effective for you. Our licensed physicians will take numerous factors into consideration when finding the right option for you.

All patients always work directly with one of our physicians to ensure patient safety and confidentiality.